It's a Disaster - trailer on Vimeo. 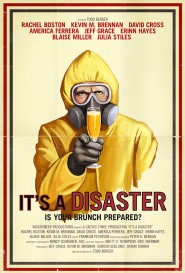 An average Sunday morning couples’ brunch takes an extreme turn when the eight participants learn that this may be their last day on Earth. Tracy and Glenn are on their third date. Host couple Emma and Pete are keeping up appearances even though their marriage is falling apart. Lexi and Buck maintain an eccentric but happy open relationship. And Shane and Heddy have been engaged for years but have yet to tie the knot. Technological hiccups (no cell signal, a dead landline, and nothing but static on the TV) interrupt this breezy and determinedly cheerful gathering; but no one suspects that anything is really wrong until a gawky neighbor appears wearing a hazmat suit and bearing tidings of imminent doom.

The cracks in the group’s collective friendship rapidly begin to widen, exposing the interconnected secrets of the group. Fast-paced, hilarious dialogue, excellent performances, and a continually unfolding plot keep the audience on the edge of their seats until the suspenseful final scene. Impeccably chosen and placed music add an undercurrent of sly humor to this dark comedy about the foibles of human nature.

“Disaster is one of the funniest movies of recent vintage.”
Hollywood Reporter

Written and Directed by:
Todd Berger